There’s a new phenomena in the service invoice category. Imagine this: Your company scores an account set for major growth. It could go from being a $10k account to $150k within a year. When scheduling your internal resources to work on this account and scheduling meetings or conference calls with the client you employ a “Project Manager”. Then you bill the customer back for this “Project Managers” time.

Sounds fantastic until the customer gets the invoice. Four hours @ $120+ per hour for “Project Management”??? Okay, where’s the Project Control document, the Gantt chart? Where is any deliverable at all? Where is there any value add to the customer what-so-ever for the hours you billed them to cover the cost of an internal resource scheduler? This is exactly what NWN Corporation tried to pass off to me over the last couple of weeks as billable work. I told them I would not pay another dime towards the salary of their internal project or resource planners. In fact there seems to be some confusion within some service providers these days as to what the title Project Manager means.

Yep, part of project management is resource scheduling. But unless you are scheduling THE CUSTOMERS RESOURCES you are providing precisely ZERO billable services to the customer. You are doing nothing but charging your Project Manager’s salary back to the customer. Put it in a scenario: I on a security component installation company. Imagine I win a contract to install 100 security cameras. Then imagine that I employ a Project Manager to come up with an INTERNAL project plan and schedule techs for the field. Now imagine I present that persons work as a line item on a bill to the client. WHAT? Why should any customer be forced to pay for someone to create our internal project control documentation and schedule when our techs will be on the job? Absurd. Next up, we will bill by the hour for the work our HR reps do in hiring the staff to do the work. Why not just go all the way to putting a line item for the Receivable Manager’s time to prepare the invoice? How about the janitor? I mean technicians have to pee right? Might as well bill back for toilet cleaning as a line item.

How about learning the difference between internal Project Management and genuine Project Management services for the customer. Nobody owes you a dime for the cost you incur for scheduling your staff or for a non technical person to listen in on conference calls. 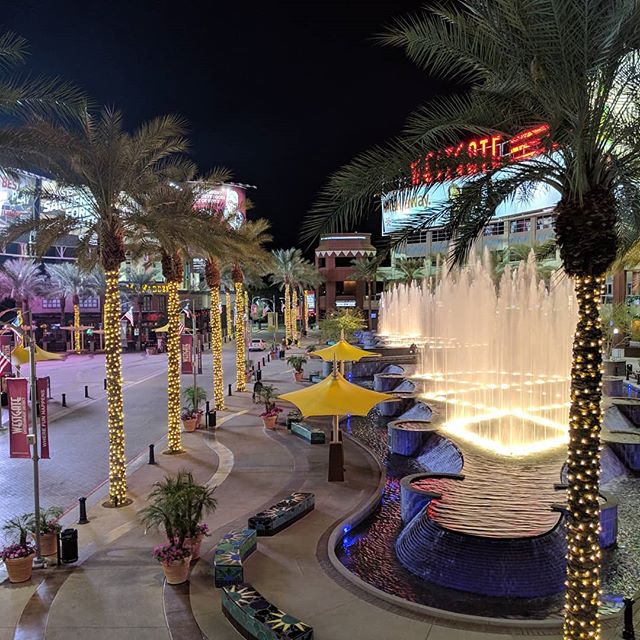 Anyone who pre-ordered a titanium Red Hydrogen One will get a free Aluminum model since the Ti have proven difficult to manufacturer.  They will also receive the Ti model they ordered once they start shipping.  Personally I’ve got to wait for the aluminum model to be available through Verizon and AT&T on Nov. 9th.  I haven’t been this curious about a phone in a while.  Especially interested in the camera.

There’s your answer.  That’s about as simple as it gets.  If you’ve finally made the decision to buy and ride an eBike you have no choice but to accept why you did:

I personally know people in their 80’s and others missing limbs who ride “analog” or “acoustic” bikes as the lazy hipsters no call them.  And don’t you dare for a fucking second say anything about how you can now “go places and enjoy cycling” because you’re “pedaling just like they are” in reference to those who are tough and have strength.  Ebikes are for the weak and therefore their riders must accept being labeled as weak.  So when you’re called a Pansy Cranker or Sissy Spinner you simply say “Thank You” and ride along.  You have no right to argue against your weakness and you will not be considered a real cyclist under any conditions.  Most likely you can’t or won’t even be able to handle the bike under speed because you are not a conditioned or disciplined rider who got yourself to that speed.  Motor+Pedals = Moped.  Amazing some eBike riders will argue this.   These are the ones who are physically and mentally challenged.  Understand that real cyclists don’t hate your eBike.  We hate their weak riders.

It looks like Salesforce.com will finally support SMTP authentication in their Winter 2019 release.  Well, at least they’re only a decade late.

I spent a lot of time in my 20’s racing mountain bikes.  Then a couple of years ago I thought I found the best cycling sport to ever cross the Atlantic.  Short track, dirt, spectators, cyclocross has it all.  It also has the very thing that lead me to personally begin to hate the sport: barriers or barricades.  Man made reasons to dismount from the bike in the middle of heated battle.  Also the very same reason cyclocross racers have to learn to “re-mount” or jump on to a tiny saddle as smoothly as possible while trying not to destroy the very thing making them men, their balls.

I never had great “mounting” skills but in the last race I entered in 2017, I had a terrible mount right in the middle of a lead group.  Many other riders hoping over barriers behind me began to slam into me.  Their mounts failed as well.  I still have the scar on my knee from the impact it took with my left pedal in the pile up.  I was off the bike about a week, not up to speed again for a month.  For what?  A “good time”.  Nope.  I always HATED the parts of cyclocross races that were man made obstacles forcing me to jump off the bike.  Stairs and barriers mostly.  So much that I decided I don’t like the sport.

I imagine the interest in cyclocross might be greater if they adopted an even more grass roots approach to the sport, like gravel racing.  Here’s what I think would make a truly great off-road cycling sport for all ages.  Gravel grinding is not far away from achieving these exact specs with new 25 mile short track series emerging:

Like I said, short track gravel series are getting close to these specs so next year I’m taking any money I would give USA Cycling and heading towards the true grass roots gravel series.  Anyone who wants to put up what I call “prancing boards” for men to risk their manhood over can and will certainly argue how much fun it is.  Likely they’ll just downplay my skill at dismounting and jumping back in the saddle or the fact I can’t bunny hop 14″ high boards without risking hospitalization.  I don’t give a damn.  I’m not doing it because I don’t think it’s fun and it hurts me to watch grown men in an aggressive dirt sport prance over two little boards as much as it hurts them when they have a bad “mount”.  Prancing and mounting have no place in dirt cycling.

Let’s see if they can finally get this correct.  It’s really starting to bother me. 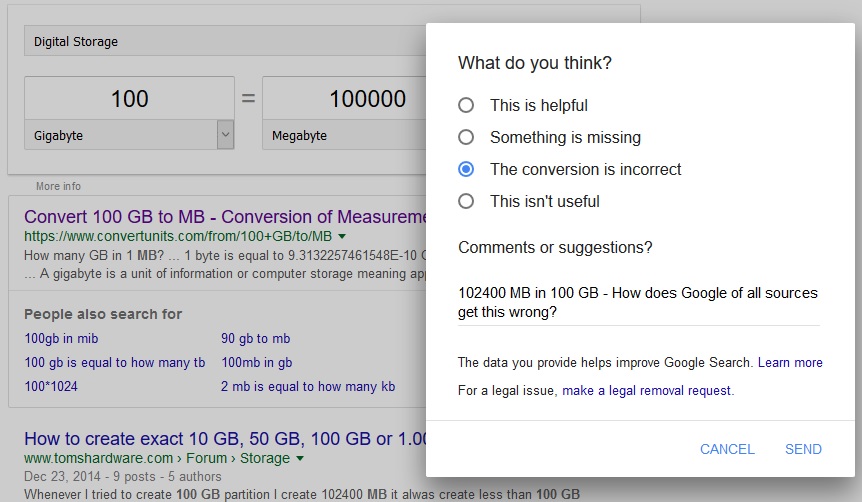 Scammers, spammers and phishers all have a solid source of information they can call upon to find out who holds what position in a company. LinkedIn provides a reliable, updated corporate hierarchy for them to find the names of Principals and management so they can forge emails in their names for delivery to accounting and payable’s staff they find the names and contacts for where else? LinkedIn.

How do they know the email address to send the message to even if they know the accounting representatives name? There’s a good chance your corporate email address is firstname.lastname@company.com or tsingleton@company.com. Not hard to guess the syntax in companies that don’t use obscurity for security in email address syntax. So the information on LinkedIn is almost like free Lexus Nexus for those with ill intent.

I clicked on “More info”….”Aaron is a Search expert and author of this help page”.

Well Aaron might want to let someone in a nearby nap pod know that there are 1024 bits in a Megabyte.  For about a year when I go to do a quick digital conversion using a standard Google search the answer comes back wrong. 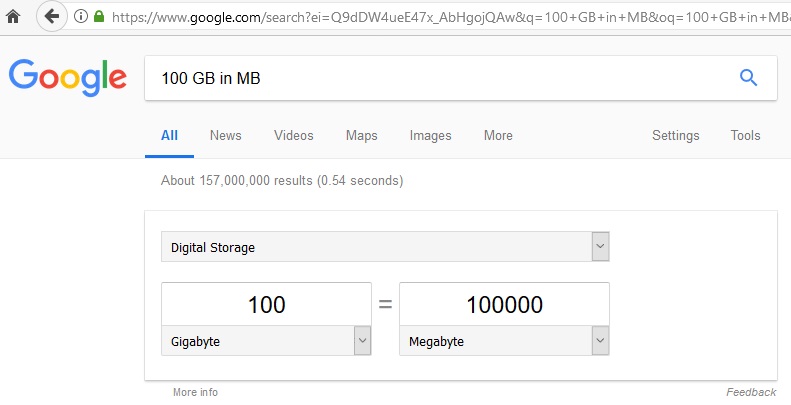 The correct answer is of course 102400 MB in 100 GB.  I’m a little embarrassed for them.   Wait, should I be double checking how much Gmail storage I have left?