“Another means of silently lessening the inequality of property is to exempt all from taxation below a certain point, and to tax the higher portions of property in geometrical progression as they rise. Whenever there is in any country, uncultivated lands and unemployed poor, it is clear that the laws of property have been so far extended as to violate natural right. The earth is given as a common stock for man to labor and live on. If, for the encouragement of industry we allow it to be appropriated, we must take care that other employment be furnished to those excluded from the appropriation.” – Thomas Jefferson to James Madison, 1785

The GOP/Tea Parties convictions are based upon the flimsiest of principles: no one owes anyone else a living. That is not much of an engine to drive America. It speaks more to the notion that we are each an island unto ourselves, taking as much as we can get for ourselves, giving as little as we are compelled to give to others. This nation wasn’t built on the principle of leaving your neighbors in harms way.

Based on their message, had any of these GOP candidates been a firefighter, most would have never have rushed into the Twin Towers, because they wouldn’t have owed anyone that effort. Had they served in the military, they might have a completely different idea about not leaving anyone behind. Sorry, GOP, it isn’t really the government that needs fixing; it’s the politicians who think the rest of us owe them unfettered access to America’s largesse in perpetuity, first as incumbents, then as consultants to government funded corporations, then as lobbyists, ad infinitum.

The Citrix Receiver for Android allows me to connect to the desktop of a XenApp server via the Access Gateway web interface.  Because the Motorola Atrix contains a full version of Firefox the Access Gateway works flawlessly, even over 128-bit SSL.  I tested this ICA connectivity form the phone alone.  Then the insane benefit of the Atrix Lapdock became apparent.  With a larger screen and keyboard I can administer these Citrix servers anywhere I can get and AT&T data connection.  Verizon has the same setup in the Droid Bionic.  The Bionic tethers to the Motorola Lapdock 100 as does the Atrix 2 as these phones don’t have a proprietary injection molded cradle like the original Atrix 4G.

Today I finally received a lapdock for my Motorola Atrix 4G.  It my be the coolest combination of devices I’ve ever owned. Using the Citrix receiver for Android I’m able to connect to the Xenapp servers at work through the Access Gateway VPX.  I haven’t found a Firekfox Add-in that doesn’t work yet.  Light as a feather, this is truly one incredible device.  Does about a dozen things that are near impossible on an iPhone and a few that are impossible, like docking to a lapdock.  The Atrix is the smartest smartphone I’ve ever used.  And I’ve used almost everything up to and including the Samsung Galaxy 2.

I did have to upgrade my plan with AT&T to the 4G unlimited. It’s worth it.  This thing is replacing an entire laptop and has connectivity in more locations.

Public protests in objection to Wall Street seems to be working well.  In Oct. the DJIA had it’s highest recorded gains during a single month in history.   Republicans and their laughable, reality TV style debates are the most popular thing on every week.  Yep, the Occupy protesters are taking action!  They took time off protesting to go buy an iPhone 4s.   That’ll learn ’em.  Greedy Apple.

Sad part is I agree with a lot of what they’re protesting but the methods have been so ineffective that Wall St. is chuckling and moving on.  Things taking place in Europe are having far more effect on the markets than the Occupy movement.   If these protestors really wanted to “take action” against greedy corporations they’d act with their wallets.  No Starbucks, cancel the smartphone contract, stay out of Wal-Mart, park the car, no cable or satellite TV, close the bank account….*gasp* real sacrifices?

But no. The protestors continue to pay the evil corporations for these invaluable products.  Americans sure are spending a lot of money to be so poor and stepped on.  So yes please Occupy… but don’t forget to pay your bills first. 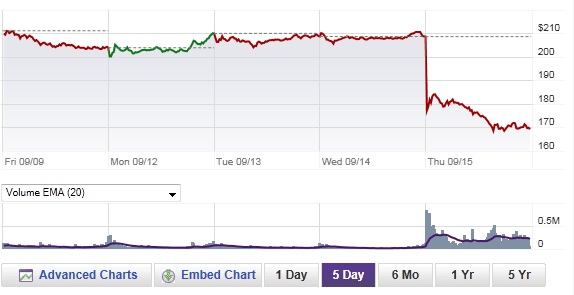 A few of my investment decisions have been influenced by things that I see my kids and their friends showing the most interest in.  Nintendo vs. Playstation, Nick or Cartoon Network, You Tube or Hulu…

Until recently I didn’t even realize Connor and his friends knew the difference between Dell and Apple.  Let me preface this by saying most of these kids have access to both.  At Connors school they are required to do portion of their homework on-line.  They have Apple computers in their labs at school. Now Connor wants his own computer in his room at his desk.  He specifically said he wanted a Dell.  “One of the ones you can change the case on”.  I asked if he’d rather have an Apple.  He said “um, no”.  Then he very specifically, and surprisingly, said he doesn’t like the browser.  I asked if he meant Safari and he said “ya”.  Then, to my complete surprise, he said “Apple’s are not as cool as Dell”.  One of the more shocking moments of my week as this was without my influence at all.  In fact, I’ve often represented Apple as the solution for kids because they’re a little easier to use and, until recently, harder to corrupt.

Apparently most of the kids in the Senior Academy, the high school at East Wake Academy, carry Dell’s.  Affordability probably factored in the older students purchasing decision but like it or not this type of presence does have an influence on they younger kids.  iPads?  Useless.  Try having an 8-year-old type a paragraph on a freakin’ iPad.  You might as well give them your phone to do it.  In fact, my Motorola Atrix has far more memory, processing capability and docking solutions than any iPad.  I could hook it to the lapdock and provide him a more suitable WORKING platform.  That’s the key here…work to be done.  Ever try actually working productively on a tablet for more than a few minutes?  You won’t do it twice.

Now to be fair Connor and his friends all praise iPods.  Yet they seem to have no interest in tablets.  Not sure what the difference is other than the size.  But they really want Dells.  I’ve heard them praise the name.  Something I never really expected.  When asked about a Macbook or a Dell I’ve even heard 13 and 14 year old girls answer Dell.  Where did this come from and what does it mean?  Are Macbooks going to be relegated to a pretentious, over 25 crowd who are more interested in looking hip than actual productivity? Note: writing email, sorting photos and music is not “productivity”.  Productivity is spending hours upon hours at a physical keyboard.  Most adults I know who use Macs exclusively have never written as much in one sitting as I wrote in this blog post.  Of course there are exceptions and I’m stereotyping but the real point of all this is the cool factor.

Could it be that Dell is gaining traction against Apple at their own game?  Could Dell actually become cooler than Apple?  Gasp!  Has it already happened and adults with their heads in the clouds just don’t realize it yet?  If so, Apple has a real problem because their sales are now solely based on product image.  Not performance or innovative technology but shiny aluminum cases housing flakey, and yes, unstable operating systems when compared to Windows 7.  The loss of Jobs, the emergence of Dells image and Windows 8 on the horizon all may mean trouble for the #1 titan of over priced, gotta have it garbage.

How important is this stock as an indicator?  Here’s some insight from Seeking Alpha…

I’ve got to make a decision.  Futures indexes are all up, Asian markets opened in the positive.  Pointing to an all round bull market opening.  Nothing new is going to come out of Washington before the bell.  They want the cautious optimism to continue until the 11th hour.  The futures market seems overly enthusiastic.  I”ll check it again in the morning.  Selling the shorts depends on two things: will their be a bill that looks like it might get through the House and does the market look to be set for a rally in preparation for a bill to get through.

There are other factors to take into consideration.  Even a short term rally, which looks likely given the Asian and futures markets, could substantially  eliminate any gains my shorts have experienced.   In fact it could shoot them below my original bye-in for a loss.  For this reason I have queued my short index position for sale at the open.  It looks like the market will open with a rally.  I’ll sideline the proceeds to take action after a vote.  If their looks like there are the votes for this plan I’ll buy in to a few selects I’ve been watching including getting back into the Brunswick Corp.   I did not sell my real estate shorts.   May dump those in the AM too.