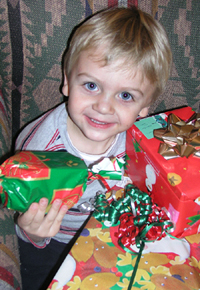 Last weekend Connor opened his first round of presents for the 2005 holiday season. He sugared up at Grandma Johnson’s and tore into brand new firetrucks, Pez dispensers and noisy little ray guns. I’m starting to see the connection between two year olds and the value of a toy: the louder and more obnoxious, the better.

Amy and I bought quiet toys like wooden train sets and basketball goals. I’m leaving the noisy stuff to the grandparents who are determined to punish us for the years of frustration provided by our kazoos and those crazy tubes we spun over our head that whistled. Remember the Whirly Tube? Oh ya, you or someone you knew had one.

Round two is on Christmas day when Connor will spend about 24 hours opening gifts from every relative on the east coast. Thank ye ol’ blessed playroom.

Tonight I’m going to make Amy watch The Devils Rejects by Rob Zombie to get in the mood for the holidays. Heh, heh, ho…. 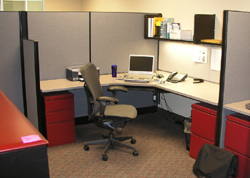 I now work in the 21st century again. Dillon Supply finally got an occupancy permit for the new corporate headquarters and I was one of the first five people to move in. Mostly because I have to ensure network connectivity for everyone else and watch over the installation of the new phone system. My new cube has a lot more space than the cramped wooden desk from 1964 I had in the old building.

I’ve decided not to go back to the old downtown location unless I have to pick up something. On Thursday I’m modifying the core router, moving the branch router into the new location and creating two new sub-interfaces on the company DS3. We’ll also be patching in 96 Cat6 ports and moving an AS400 and a company file server into our new telco/data center. I’m keeping busy. This much activity warrents my absence for at least three days after Christmas when I’ll burn up the last of my vacation time for the year. And oh yes, that’s a genuine HermanMiller Mirra chair. Not an Aeron but also not a knockoff. 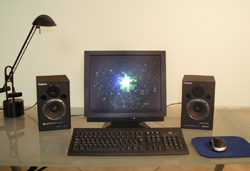 Amy’s going to be mad – I found a “deal.” No, really. I got $35 off internet prices on a pair of “open box” Roland DM-10 powered monitors at Sam Ash music. Let me tell you right now that if you’re listening to music from your PC using anything but professional grade digital studio monitors you simply do not know what you’re missing. And you can own them for less than the cost of some “gaming” surround sound PC speaker systems from Altec Lansing and Bose.

This all started because I needed a set of speakers for my PC since I have none. I’ve always used a stereo receiver and speakers. I began by looking at regular 3 piece PC speaker sets but was not happy that all of them were “PC silver.” My motivation for monitors became dual pupose – sound and appearance. When I walked into Sam Ash and they offered a discount on the last pair of DM-10’s in stock, I took ’em. I know it was weak and impulsive but these things sound incredible. If I feel bad about spending the money so close to Christmas all I have to do is turn them on and listen to Octane or The Coffee House on Sirius. 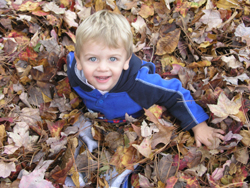 The leaves have finally fallen off the trees, it just took until late November. And we were recruited to Nana D’s house for removal duty. It wasn’t so bad but it took a little longer than normal since we had to keep up with Connor and keep him out of the leaves. He had a lot of fun so it wasn’t hard to put up with. I used a leaf blower and a lawn vac to shorten the job. 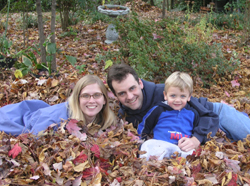 Eventually Connor went off to play with my mom’s next door neighbor’s kids, Megan and Charlie. That’s when I got the work done. now I just have to find time to finish my yard between now and Thursday. All of Amy’s family is coming to our house for Thanksgiving. Amy has never done this before. It ought to be interesting. 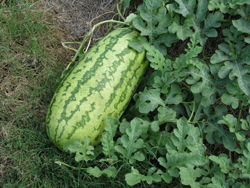 Just before the first frost hit I made the decision to cut our backyard watermelon free. I really decided to do it because Matt, Lauren, Andrew and Daisy came over to hang out. It could have used another two weeks but if I had left it there it would have killed the melon and any chances of the vine producing anything in the future. It was actually real good and none of the kids had ever had a watermelon straight off the vine. 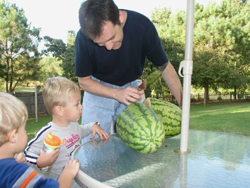 Lauren took pictures as I cut it while Connor stood to close to my knife for comfort. Andrew and Connor ate most of it and we gave half of it to Matt and Lauren to take home.

Google Analytics was a flop for me. I could never get the required code installed in WordPress. Google got overwhelmed with requests for this service and quit accepting new accounts. I think they grossly underestimated demand for this service.

I got frustrated trying to install the code in the version of WP that I refuse to upgrade to any of the new theme based releases, I like my current css. So I went and checked out statcounter.com. It automatically emails me all of the stats I need each week. The free version is limited to analyzing the last 100 visitations in the log but I don’t foresee needing to gather any information about any more than my last 100 visitors. So analyze this google – I’ll come back when Analytics tracking code is easier to integrate into WP 1.2.1 and you can track the stats of current subscribers a little faster.

Following are the safest and most dangerous cities with populations over 75,000, according to Morgan Quitno Press.

I live down the road from the 10th safest city in America and just last year I wandered around the third most dangerous city alone for two hours, good ‘ol St. Lewy.

David Rakoff is the author of the new book Don’t Get Too Comfortable: The Indignities of Coach Class, The Torments of Low Thread Count, The Never-Ending Quest for Artisanal Olive Oil, and Other First World Problems.

This book delves into the hypocritical aspects of American life, the luxuries many of us take for granted and the absurdities we simply ignore. And, once again, it got me thinking about how good everyone in America has it compared to the rest of the world despite our frustrations at home and work and our self commitment to a never ending rat race. I looked up some encouraging facts any westerner should pay attention to if you ever feel like you’ve got it bad:

1. If you woke up this morning with at least $350 US dollars in the bank you are in the wealthiest 8% of the world’s population.

2. If you consider yourself a somewhat healthy American then you are far ahead of the 1 million people in third world countries that will die today because they lack access to basic amenities you take for granted – like vitamin A in their food.

3. If you’re religious and you feel free go to your place of worship regularly in America you’re way ahead of the almost 2 billion people who are assaulted, arrested, incarcerated and tortured each year for attempting to worship or participate in their religious beliefs.

4. If you woke up this morning and took a shower or used a toilet then congratulations, once again you’re ahead of approximately 2.6 billion people, or 40 percent of the world’s population, who lack access to basic sanitation.

5. If you put gas in your car recently, at any price, think about this: in a passenger car, for example, typically only 10 percent of the oil’s energy actually moves the car. Of that, only about two percent actually moves the passenger. So you are wealthy enough to afford an energy resource you will only use at 2% efficiency to haul you down the road. The rate of cars being built now exceeds the rate of growth of the world’s population*. And you are fortunate to be among the 28% of the world’s population that owns them.

So don’t be surprised to find me laughing at anyone who is about to bust a blood vessel because they forgot to put ketchup in the bag at the drive-thru.

*NOTE: To clarify this is growth rate based upon percentage. From 1974 to 1999 the number of automobiles manufactured per year increased 44% and the world’s human population only increased 16%. As of August 2003 there was 1.9 cars in America for every licensed driver. – Source: Transportation Alternatives, NYC

…is still on WRAL’s website right here. I just found it in a report about how the state is preparing for winter weather this year.